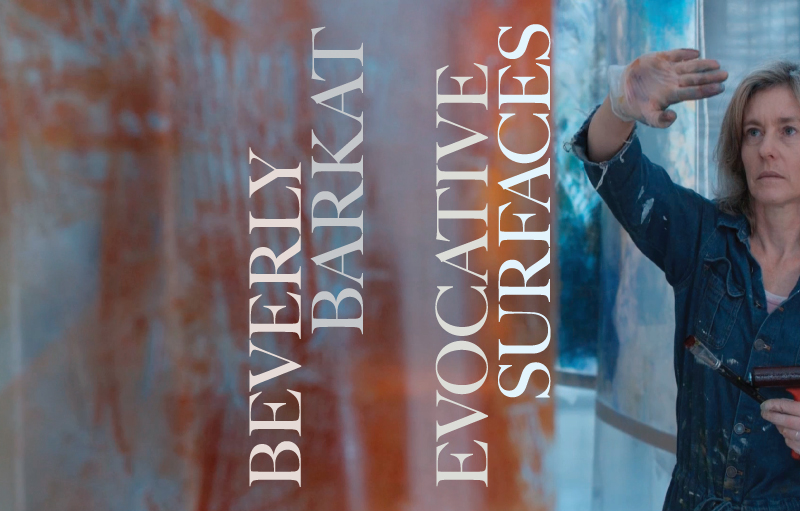 Cover image: Beverly Barkat at work in her studio, 2017. Movie still from a short movie about the artist’s work and practice, created by Tor Ben-Mayor.

To coincide with the 57th Venice Biennale, the Museo di Palazzo Grimani is staging Evocative Surfaces an installation of large-scale paintings by the artist Beverly Barkat. it features a site-specific series of painted PVC sheets produced especially for the spaces of the palazzo. Outset Contemporary Art Fund supports this exhibition.

‘Evocative Surfaces was inspired by the Palazzo Grimani and the energy within the building,’ says Barkat, who specifically chose the Palazzo Grimani for her painting project. ‘I want my pieces to do more than just hang in the Palazzo, I want to create a real dialogue between old and new, the architecture and my paintings.’

One of the only high Renaissance palazzos in Venice, this outstanding building was designed by some of the most influential architects of the period – Palladio, Serlio and Sansovino – and boasts an extraordinary decorative scheme and frescoes, including a nude by Giorgione.

‘The palazzo has a powerful painterly presence that I am responding to in my work – in particular, one of its treasures – a Giorgione fresco of a nude,’ says Barkat. ‘I have been working from the nude for many years in my studio in order to better understand the movement of line. At Palazzo Grimani line and colour, architecture and painting come together at every turn and complement each other, and my work responds to that.’

Barkat is installing her paintings throughout the palace’s various stanzas, allowing the space to reverberate with the incredible visual and iconographic richness of the Venetian patrician home, to underscore the importance of painting in the late Cinquecento. Viewed as ‘objects of entertainment’, paintings were an integral part of the overall decorative scheme, meant to evoke the grandeur of the Grimani house, as well as the Venetian Republic and its rulers through an Arcadian iconography.

In the palace’s main hall, Barkat is creating a site-specific installation in response to the interior architecture and the natural light that floods the space. it features 12 monumental paintings on semi-transparent PVC sheets, hung from the wooden beams of the ceiling and reaching to the floor. These sail-like works waft gently with the breeze from the windows and the movement of viewers as they walk around the paintings.

Hung near the windows, the sheets are painted on both sides and present an overlay of images that interacts with the space and its light. Each side of the sheet contains a distinct painterly unity while at the same time echoing the reverse side. The overlapping layers of abstract painted gestures combine into imagery that recalls the pastoral landscapes of the palazzo interiors. The duality of the painting surface, together with the natural light flowing through it, evoke ideas of transparency, mirroring and fluidity that engage with the Venetian context and create a contemplative space.

Daniele Ferrara, the Director of the Museo di Palazzo Grimani and the Polo Museale del Veneto, has commented:

Barkat melts the historic into the contemporary… Like the renaissance artists, like the patron Giovanni Grimani himself, Barkat immerses herself in the architectural context of the palazzo, urging the use of new materials and exploring the potential and the energy inherent in this architectural space. for me the most important contribution Barkat has made is in rereading the space with her painting. Her work inspires many possible developments; it is far from dogmas, as open to reality as to imagination and dreams.

Barkat’s painterly practice is rooted in an ongoing dialogue with art history, while her interest in transparency and the luminosity of colour can also be traced back to her early work in glassmaking. Her foundations in both glassmaking and in painting enable Barkat to consider her paintings in three dimensions, to shift her subject matter into a subliminal world and abstract imagery. interested in the interplay of color, line, form and texture, she creates richly layered work in dynamic compositions that are at once energetic and lyrical.

For the exhibition at Palazzo Grimani, Barkat has begun work- ing on a large scale, using painterly gestures that recall action painting. The PVC support is placed on the floor as the artist physically leans on top of it to apply her fluid brushstrokes, constantly moving and changing her position in relation to it in a spontaneous and intuitive flow.

Beverly Barkat’s solo project Evocative Surfaces widens her ongoing preoccupation with the intersection of old and new that speaks pertinently today. Following Christine Macel’s curatorial statement for the upcoming Biennale, this exhibition aims to foreground the work and practice of a single visual artist. A room in the Palazzo Grimani will be dedicated to a reconstruction of the artist’s Jerusalem studio, providing a glimpse into her daily practice and her continuing research of colour, form and texture. The exhibition also features an installation of paintings around the entrance to the palazzo and a video documentation of her at work in her studio, as well as live talks open to the public. 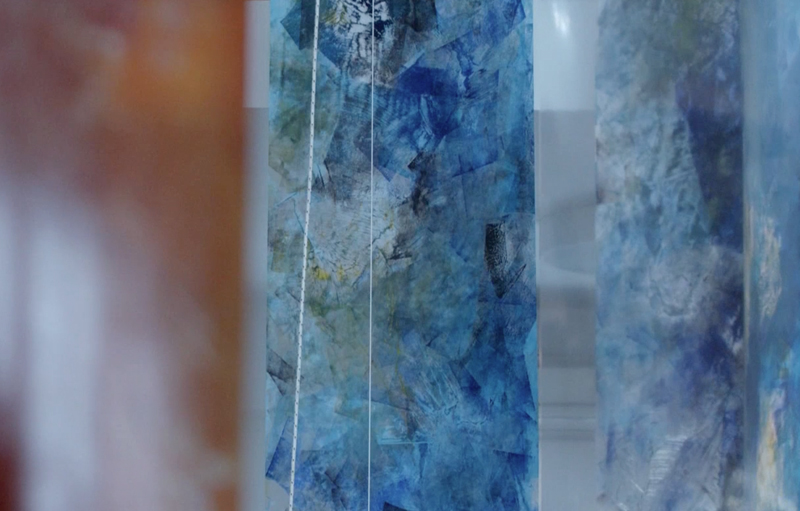 Detail from turbine 4858, 2017, by Beverly Barkat. The work takes its name from the address of Palazzo Grimani. Movie still from a short movie about the artist’s work and practice, created by Tor Ben-Mayor.

Palazzo Grimani in Campo Santa Maria Formosa was re-opened in 2008, after being closed for many decades. It is unique in Venetian history and architecture in its High Renaissance style. At the beginning of the 16th century, Antonio Grimani, a future doge, gave his sons the family house at Santa Maria Formosa. Later, on the advice of celebrated architects such as Sebastiano Serlio, Jacopo Sansovino and Andrea Palladio, Antonio’s grandsons – Vettore and Giovanni – transformed the building into a grand Renaissance palazzo. Its entry courtyard sets the tone with arcades on all four sides and is the only Renaissance courtyard in a Venetian Palazzo.
The Grimani pursued a distinctive art policy in comparison with the mainstream in the Venetian Republic at the time by introducing a language that reflected the Renaissance tastes and Mannerism of central Italy. The palazzo housed Giovanni Grimani’s archaeological collection, one of the finest of the time, which was strikingly displayed on specially designed shelves, mantelpieces and plinths in settings such as the Tribuna and the courtyard. 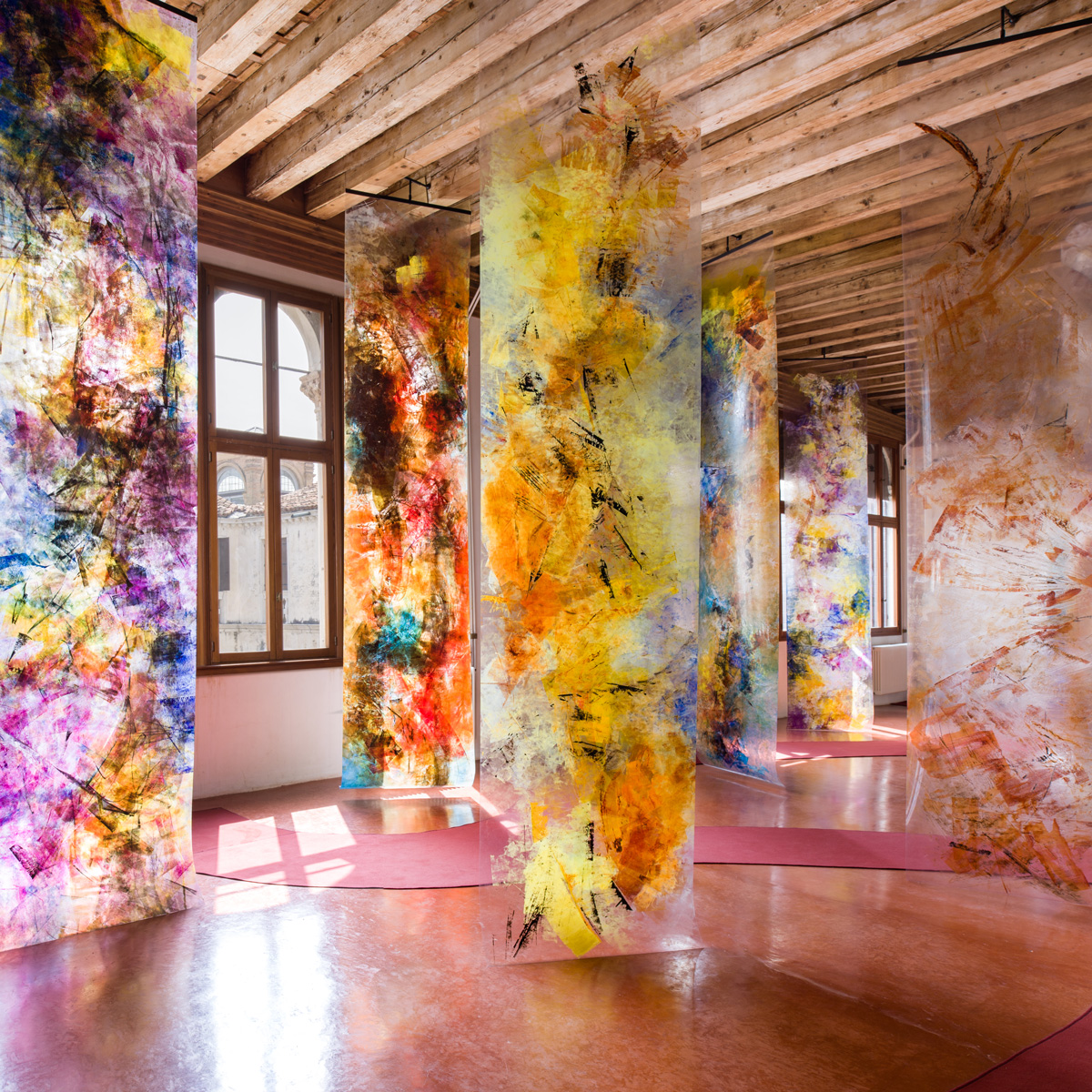 The decoration of the rooms is exceptional, with outstand- ing stuccowork and frescoes reflecting the confidently unconventional taste of the Grimanis. The decorative scheme for the palace, commissioned by Giovanni Grimani, is a kind of homage to the Mannerist culture of central Italy and alludes to the pomp of ancient Rome. highlights include the Sala a fogliami (Foliage Room’) with frescoes painted by Camilio Mantovano in the 1560s to forma a botanic garden. Arguably the most spectacular room in the palace is the tribuna, conceived as a treasury for the ancient sculptures that once stood in the niches and on the shelves lining the walls. Some of these works are now in the Venice Archaeological Museum, while others were removed at the end of the family’s centuries-old history.

Beverly Barkat was born in 1966 (Johannesburg, South Africa) and moved to Israel in 1976. She grew up with parents who were themselves artists and was surrounded by art. She earned her Bachelor of Fine Arts from the Bezalel Academy of Arts and Design in Jerusalem, to then work with clay, metal and glass, and finally she studied oil painting and drawing at Israel Hershberg’s Master Class at the Jerusalem Studio School.

Intensely interested in experimenting with new materials and wanting to discover the potential and power of architectural space, Barkat submerged herself in architectural projects. These included the building and renovation of communal spaces, private homes and libraries in elementary schools with the intention of improving the educational climate.

In 2009 Barkat opened her own studio in Jerusalem, where she has continued to develop her own language in art. She has been exploring drawing and painting with mixed media on paper, self-stretched canvasses and PVC, while incorporating the skills and techniques acquired from the various art disciplines in which she specialises.

Beverly Barkat has held critically acclaimed exhibitions in Israel and the Far East, while her works have been shown in galleries and art fairs across the globe.

Sally Haftel Naveh was born in 1969 (Colombia, South America). She earned her Bachelor and Master degrees in art history from Tel Aviv university, and studied performing arts at Yoram Levinstein Performing Art School in Tel Aviv and at Lee Strasberg institute in new York.
Since 2008 she has been an independent curator, curating exhibitions in alternative art spaces as well as in public spaces, among which the exhibition Disruptions and caution, Expansion! held as part of the Tel Aviv annual art festival Loving art, Making art. From 2010 to 2013 she served as a director and curator to Tel Aviv’s Municipality Art Gallery Kay 16 – Community Gallery for Contemporary Art.
Since 2010 Haftel Naveh has curated many solo and group exhibitions held at, among others, the Tel Aviv Museum (8 cube Museum Space); the Rockefeller Museum for Archeology, Israel Museum, Jerusalem (re: visiting rockefeller); the L.A. Mayer Islamic Museum of Art, Jerusalem (Orient Express); the Herzliya Museum for Contemporary Art (Tie Break); the Meet Factory, Prague (Objectonomy: the Economy of the object); the Jerusalem Artists’ house (The Sensitive Plant); the Art Cube Artists’ Studios, Jerusalem (Welfare of the Monarchy); she was also a co-curator of traces vi, the 6th Drawing Biennale in Jerusalem Artists’ house.